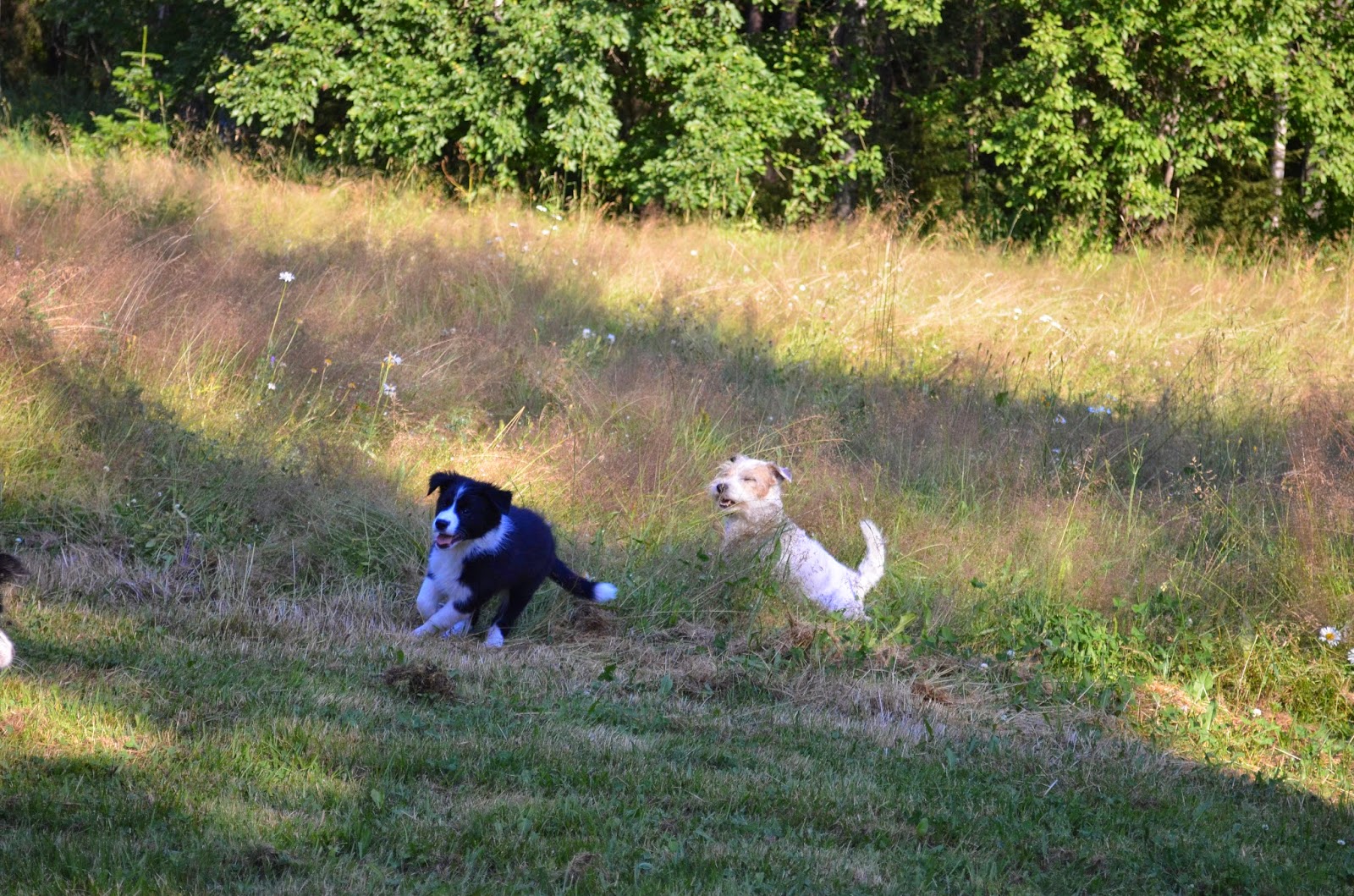 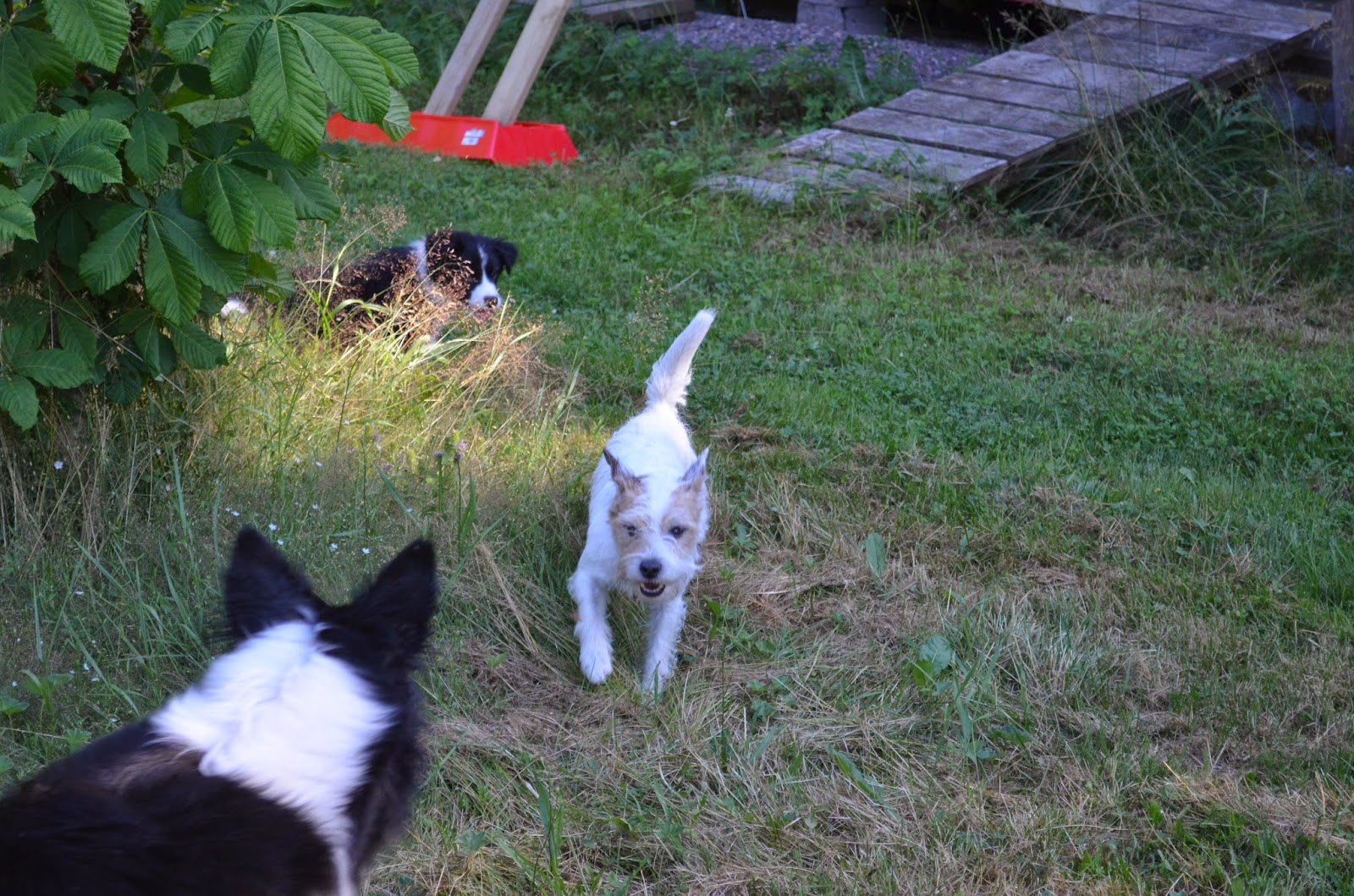 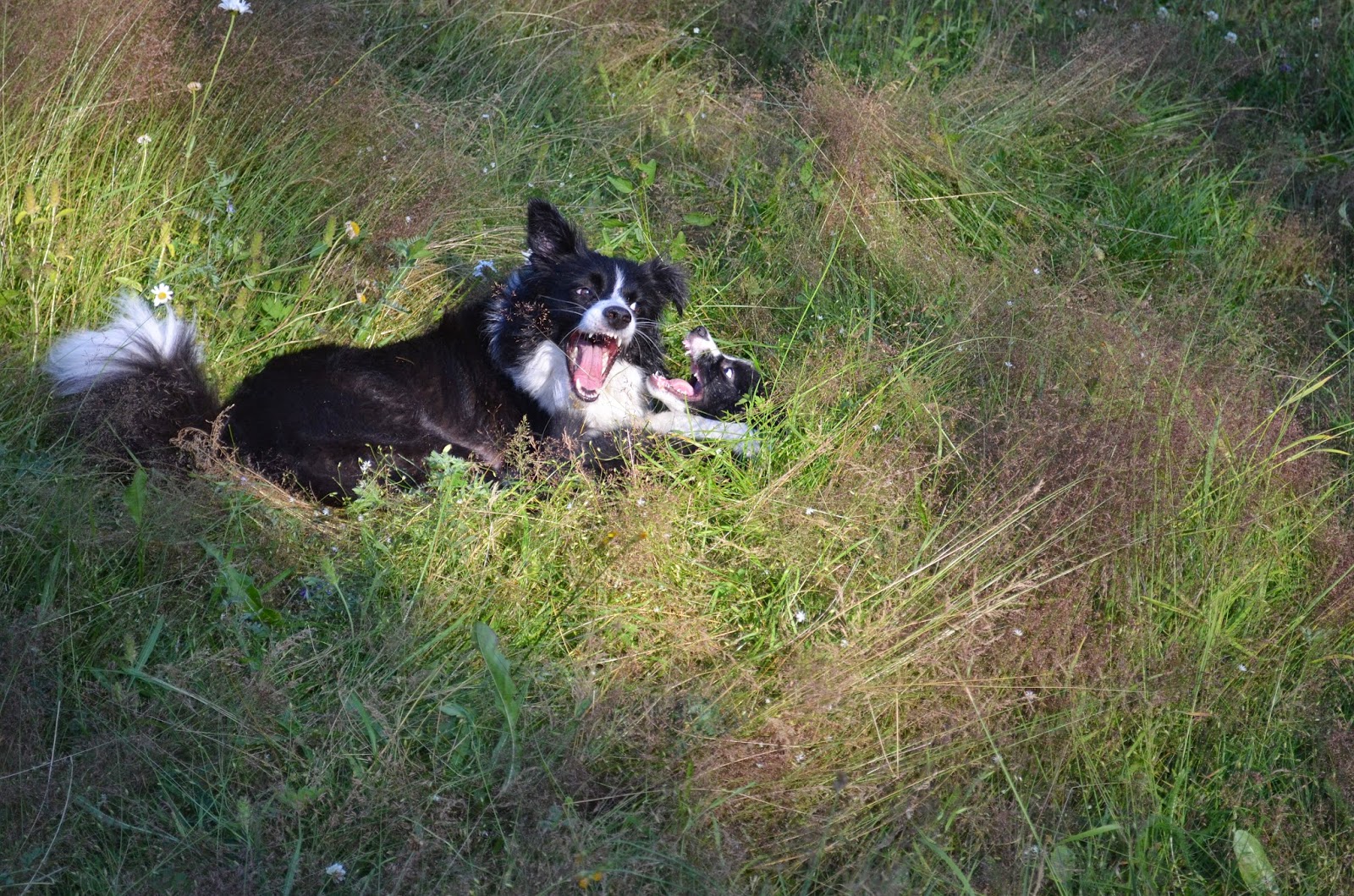 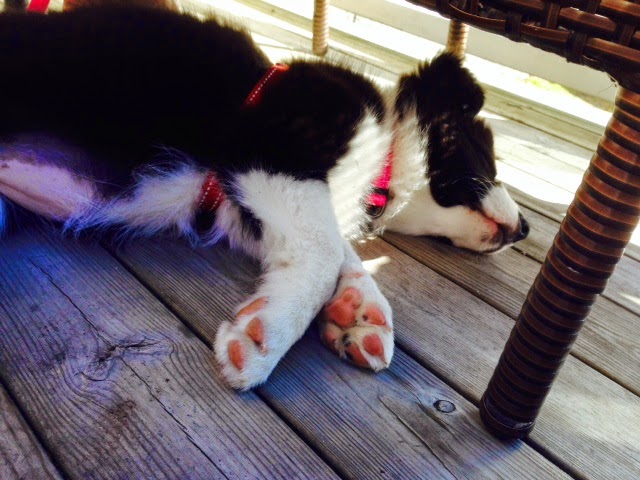 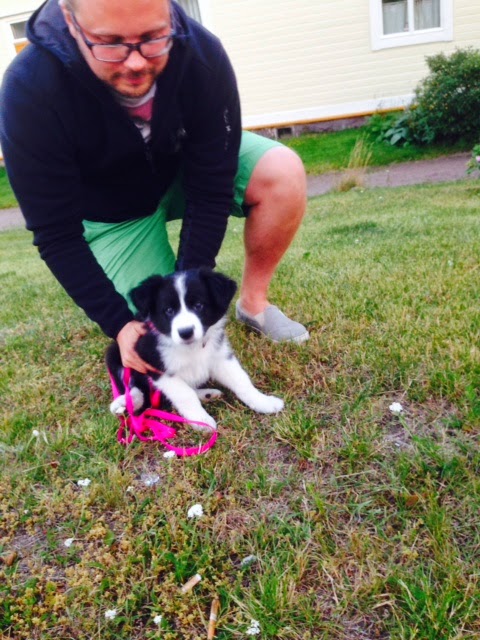 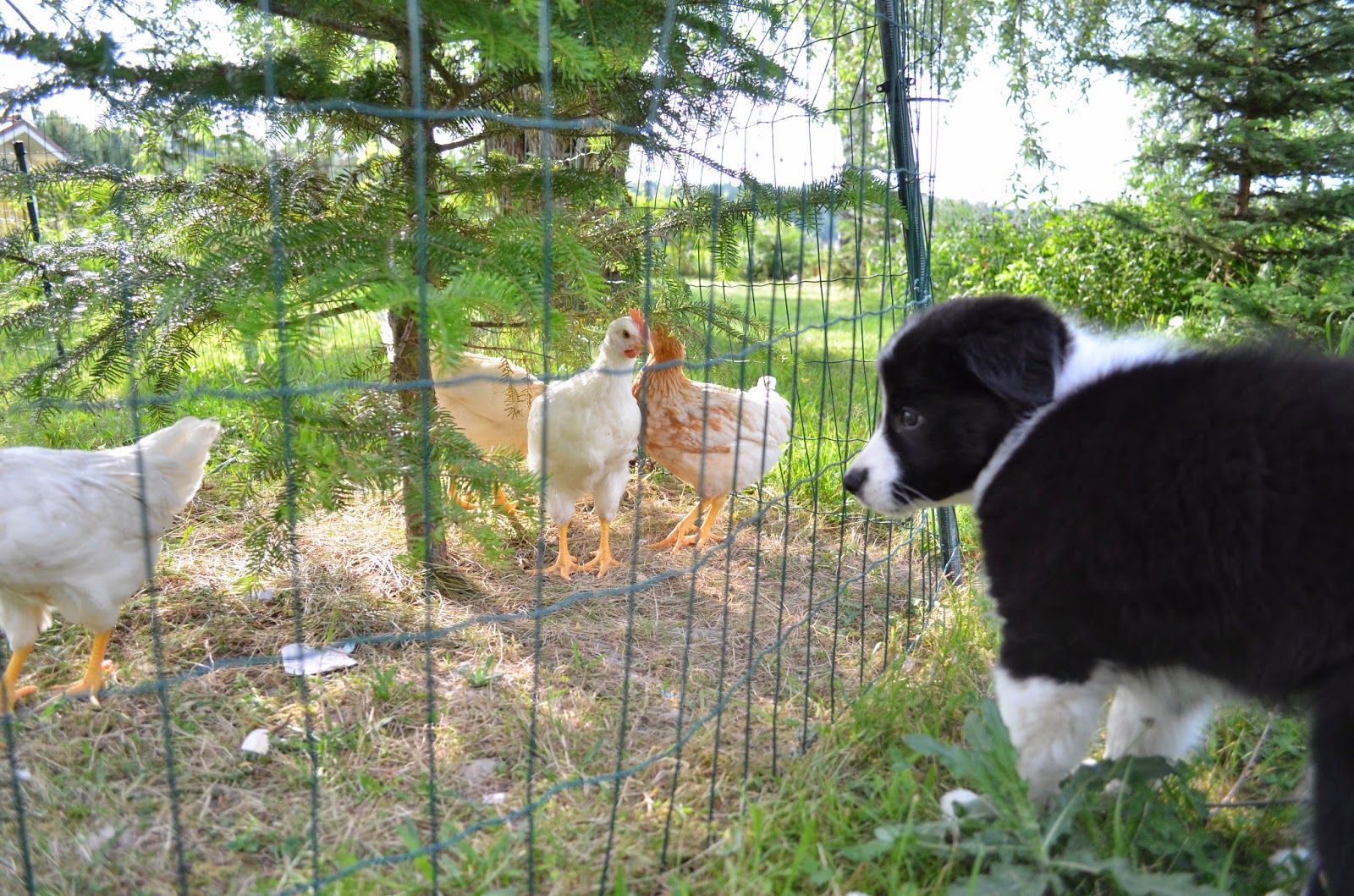 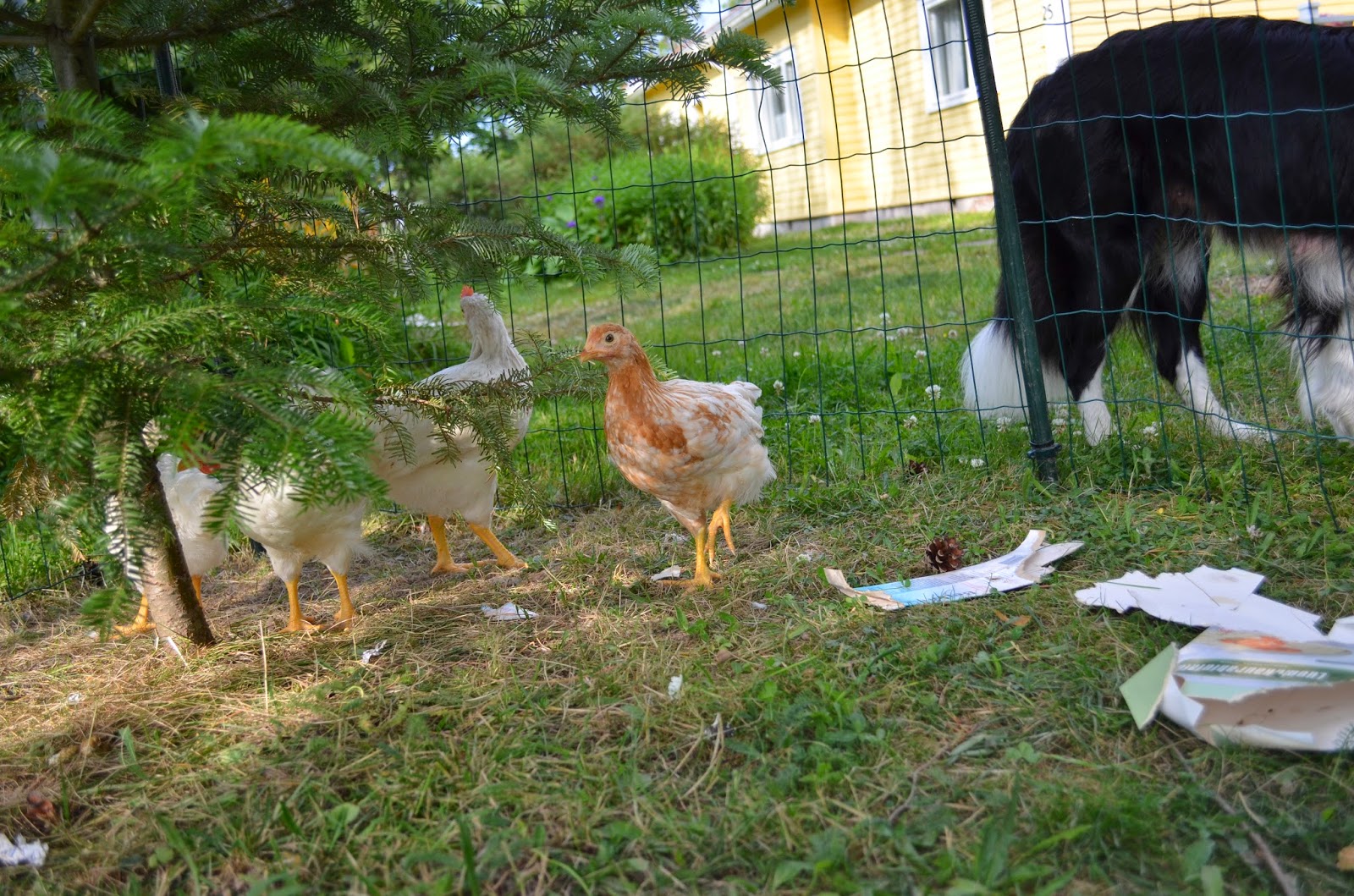 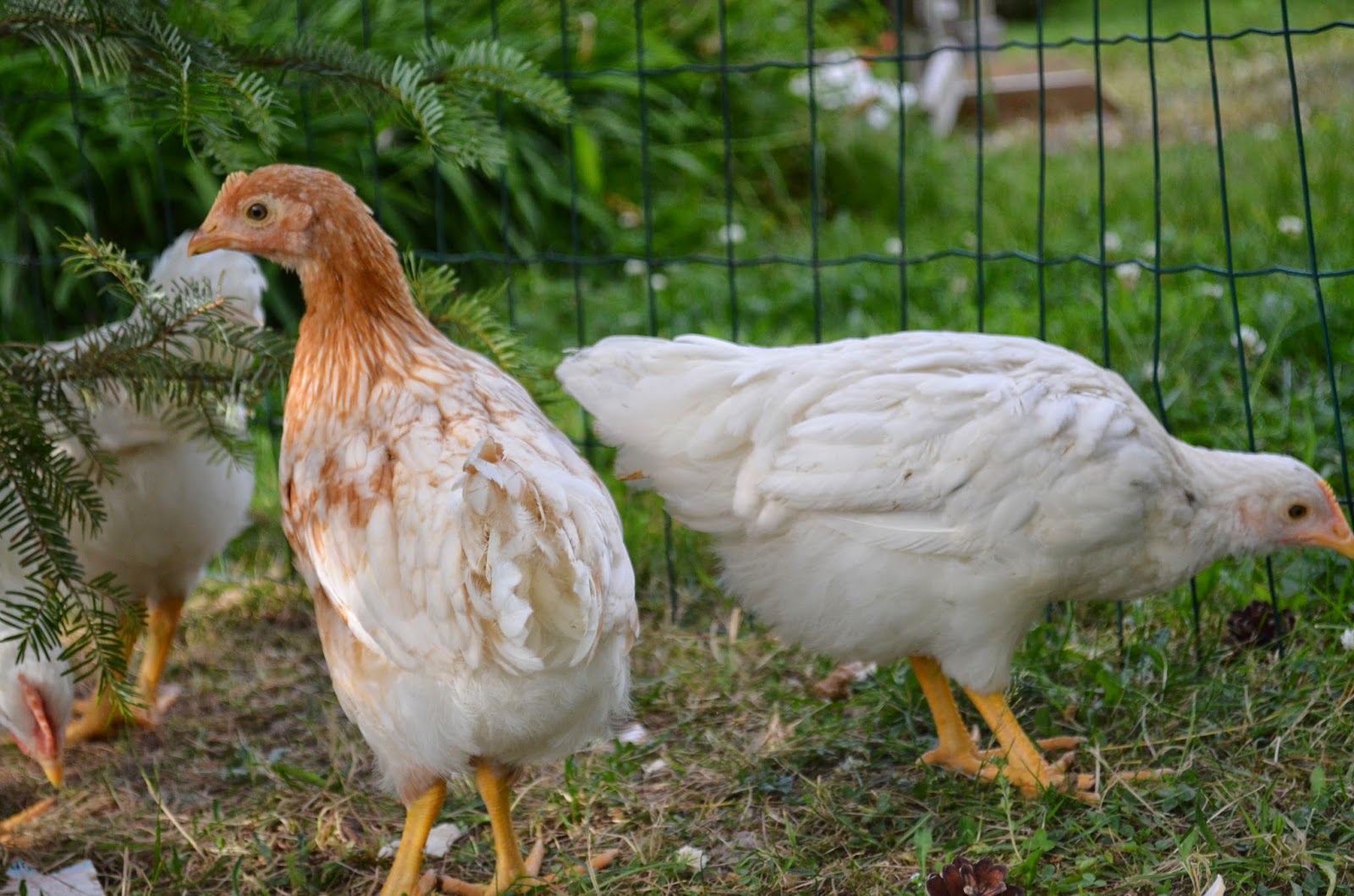 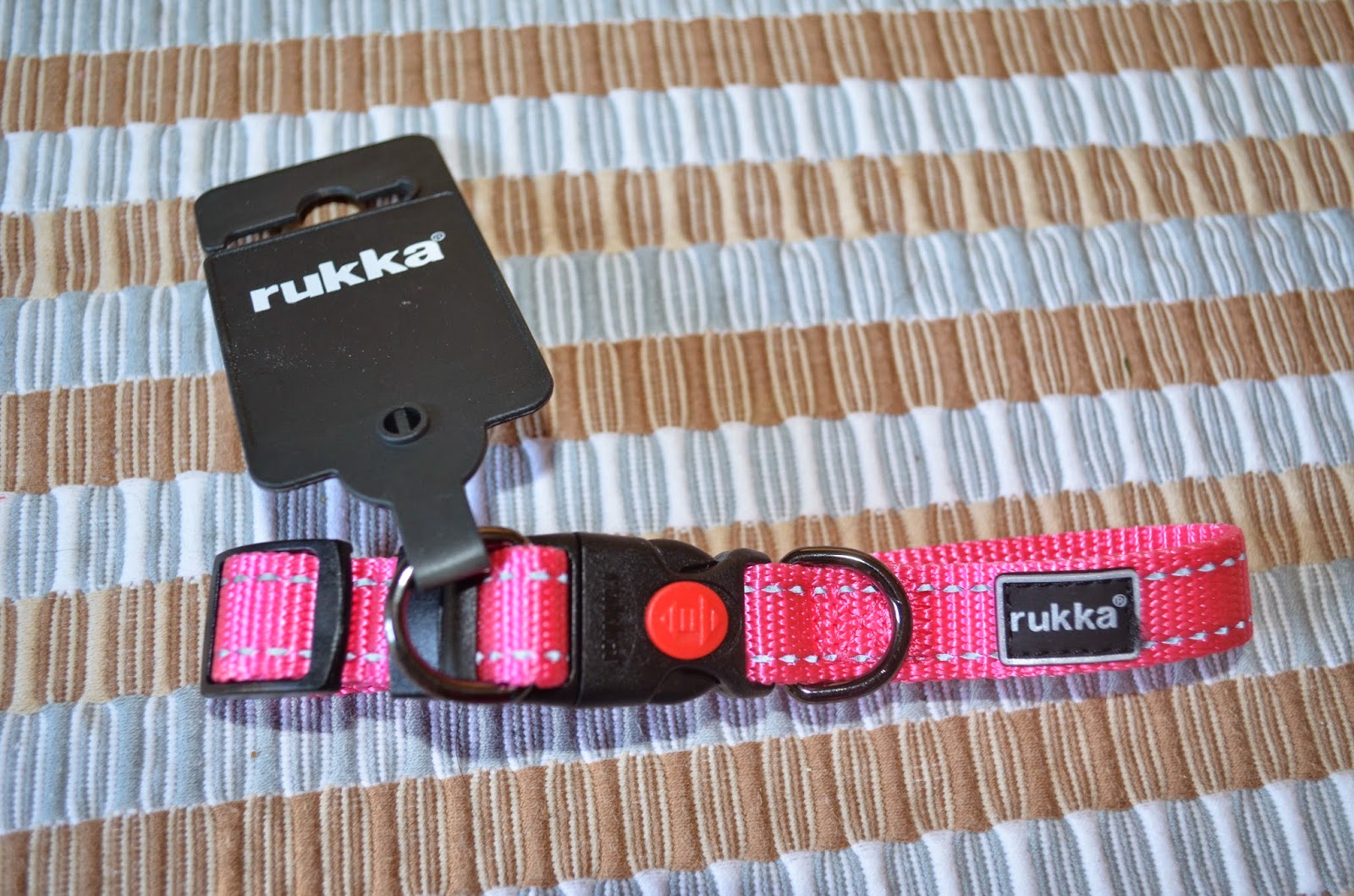 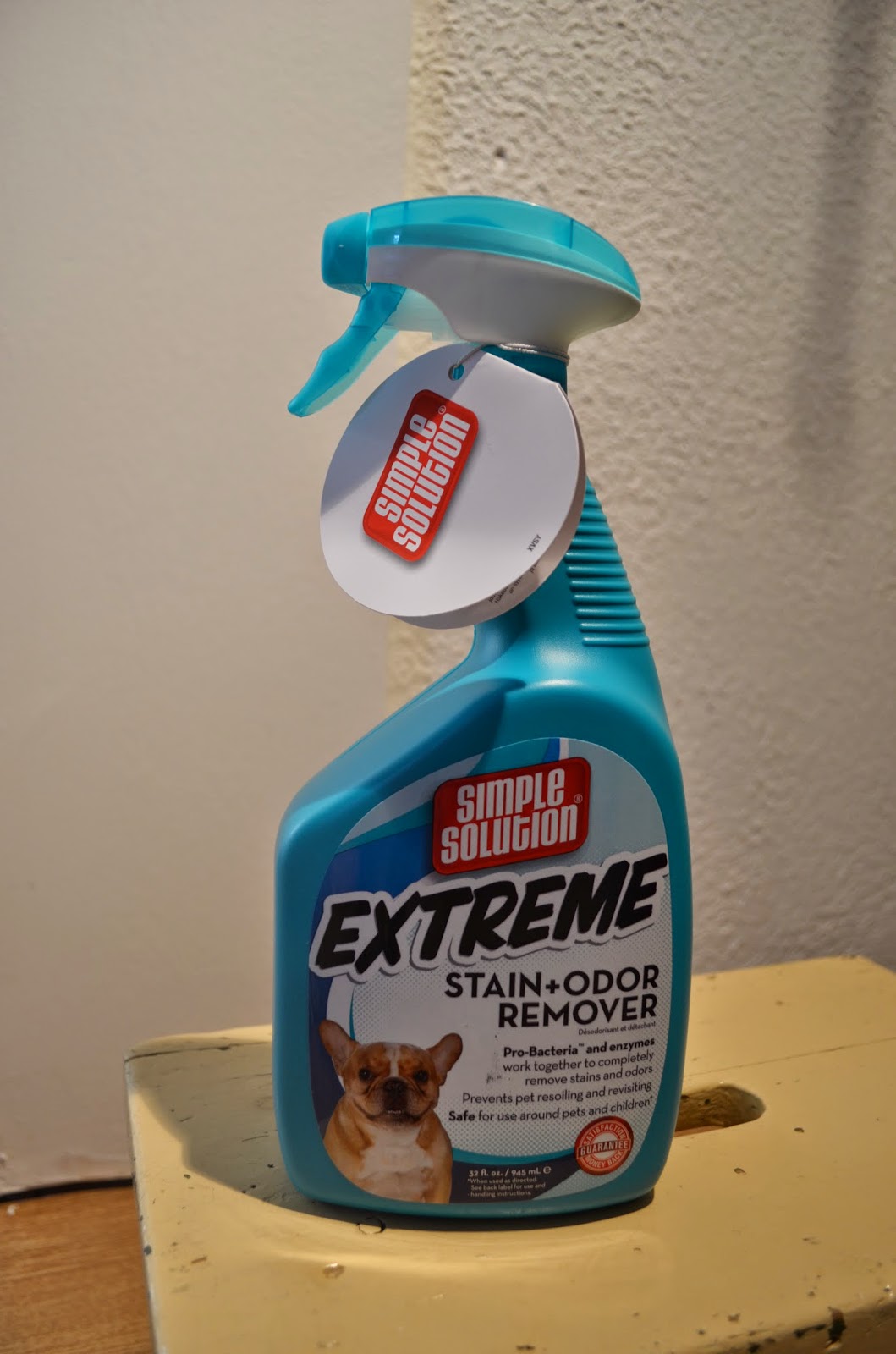 Puppies 6 weeks - and other problems

Time really does fly. Wow, soon the puppies will be big enough to leave us and it does make me a little melancholic. I have grown so fond of them all. I'm planning to write a short analysis of their personalities soon. Nothing too fancy and I'm no expert of course but I've been following them for six weeks now and do have a hunch of what they will turn out to be like.

The weather has been bad, and worse. Some days we have not been able to keep the puppies outside more than for minutes at the time. Last Sunday it rained the whole day! At the moment they eat all their meals outside, four times a day, and it's just because they poo right after. Here we go again, writing about puppies and you can't avoid writing about poo and pee. the peeing has developed a great deal as well, they find they way on top of newspaper maybe four out of six times. I'm so proud of them. today, however, it has been sunny and we stayed outside for the whole afternoon. Lyyli somehow manged to escape the fenced areas that we made for the puppies so that they don't get lost in the yard if we are not watching them every second. But she did not go far, they were hanging out with Nacho on the porch - like the most natural thing in the world.

Last weekend was bad for us, and not only weather wise. I took the dogs out for walk in the afternoon and our neighbors rottweiler was on the loose and attacked us. It's a huge male weighing maybe 40 kilos and came right at Salsa. And not like hello-who-are-you but I'm-going-to-kill-you-here-and-now. There was not much I could do but shout and try to keep Nacho away. Both dogs were on leash, which Salsa very seldom normally is. Luckily, a man, friend of the owner of the dog, acted and got the dog of Salsa. I unleashed her and the leash was tangled under the dog and the man. She showed no aggression, nor much fear. And no there was no blood. I saw that Nacho was bleeding so I yelled, not being able to talk normally in that state of mind, that I will take the dogs home and check them and come back to settle the matter.

There was not scratch on Salsa. She defended us all fearlessly. Nacho got a small clean cut in one paw and some bruises.

I was so angry. And still am. Luckily the neighbor is moving in couple of months. He promised to keep the dog on leash at all time from now on.

What this will do on our dogs behavior further on only time can tell. Nacho was shocked and tired still the day after. The paw has healed very nicely.
Salsa seems totally unaffected at home and on walks. We went to a training on Monday and it seems that she is more on the edge with dogs that she does not know than before. But not aggressively, more like she's protecting and warning me. Which I do not particularly want her to do. So I'm puzzled, should I try to calm her down and take her a way or should I control her more  but try to face the situations and make her more used to unknown dogs again.
Nacho is another matter. He's not likely to be a problem anywhere else but here on our street. He was nervous on going for a walk towards the direction of this neighbor before, now he's likely to be completely hysterical. And he is going to add rottweilers to his list of no-no friends. Which is not very long thoug; bulldogs and other brachycephalic dogs, otehr parson and jack russel males, swedish vallhund for some odd reason, german shephards and large black dogs overall - except that he has friend that is a huge flat coated retriever male, and he is just fine.

Anyhow, the worst thing is that this is affecting my behavior and I know it. Can't be avoided even if I try to rationalize it. And me being tense makes my dogs tense. Not good...

I'd like to end with something positive - and puppies make me happy after all.

Mother and daughter, or actually the other way around, at 6 weeks of age. 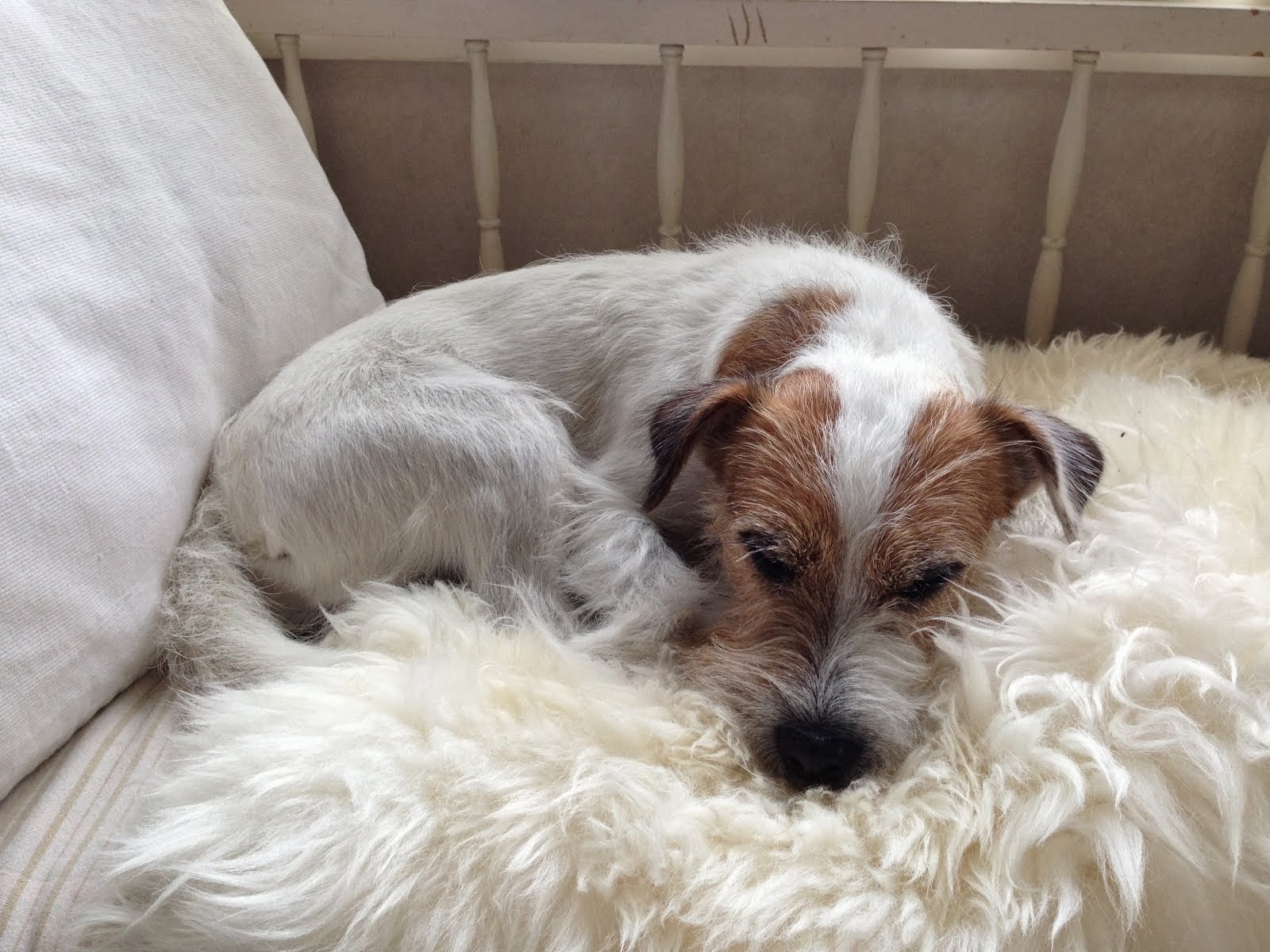 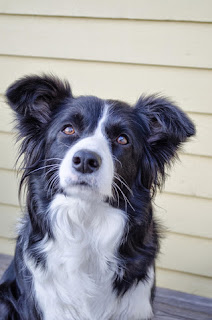 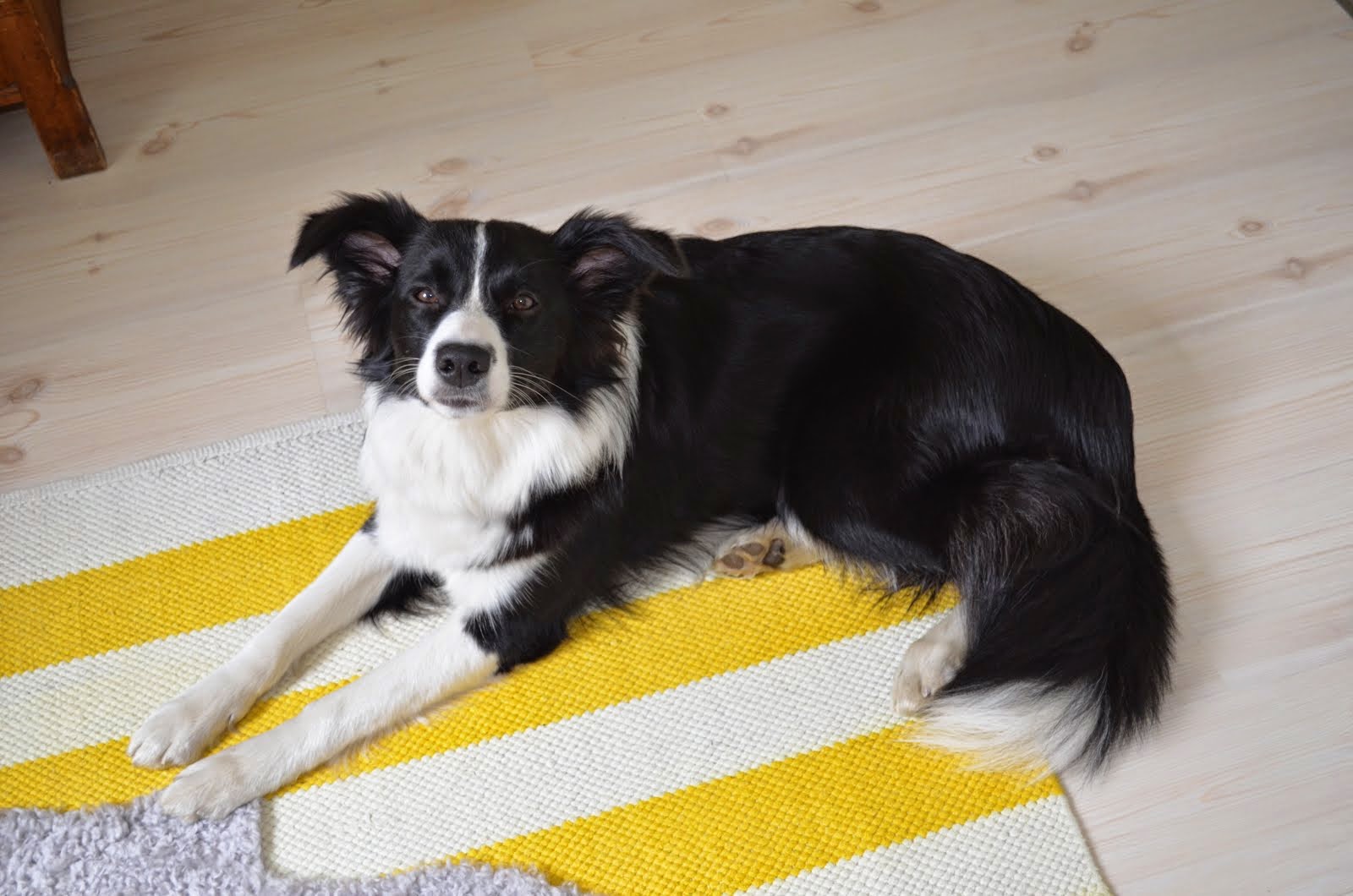